skip to main | skip to sidebar

The Block Next Door

I was getting nervous. I might lose my privacy. I really like to have some privacy. This is the truish story about when the block next door was up for sale. Lot 15. Humpty Rd.

The girls who bought the block next door, about eight years ago were washing their hands of it. They were nice girls.. bit naive though....

The council didn't like their idea of mudbricks, straw bales and smelly dunnies, like everyone round here used to have one - only a few years ago, really. Great for the fruit trees, and there was no nightman, let me tell you. Well, the girls had a lot of trouble getting any plans through, even looked at I bet.. one person at the council... but that's a story for a rainy day.... not that it rains much around here anymore... like the time the Patterson's tractor was bogged and they got another one to pull it out, but that one got stuck and then you wouldn't believe it.. another one got bogged. They had to leave them all there for half of winter..

Where was I? ohhh yesss. the block. they wanted $5000. They said they'd give me first option.. but it was a while back when they were prone to borrowing things, up from the city, Northcote, maybe, and I hadn't seen them and they hadn't told me it was gonna be up for sale until a red and white sign popped up. Local agent.

First there was an army guy who came to inspect.. Commodore wagon,.. then he came back with his wife or partner. The army guy was just being shown around by the agent who was telling crap about good for bores, even gold around here, bla bla.. when
ol' Lenny out the back started shooting for god knows why. I heard the army guy asking the agent about it in a sort a quieter voice.. I guess I never used to notice about ol Lenny and his guns. Probably the crimson rosellas on his one fruit tree. He used to rail against nature. Don't know why he lived out here. Ah well, each to their own, I guess.

Anyway, the army guy and his woman with a tight face came back with the agent I think about a week after. This time the kids on the other side were out on their trail bikes like angry gnats but a thousand time louder, They were just doing their thing. Didn't see that army guy again.

Then there was the camping guy. That was a good story that still gets the out and out around the town. Probably cuz he never came back... well never seen around the district again.
The agent rolled up in his gold fairlane with a guy behind in a blue van. This guy lived in the van, but he came back later that day by himself and set up camp there as if he already owned it. I had to check. Apperantly , after three weeks of camping out there, I heard he even had the papers... But then there was an incident that's pretty typical for round here.... Seems he went down to the local pub, and got in a big fight with a couple of the locals. I could almost name 'em but I won't. Pretty predictable really. I don't know how pissed the camping guy was but after he met some of the local gents he got that van of his and took out a couple of verandahs on the main street and shouting out weird stuff through his open window. He ran through a few fences as well as verahndas. Dented up a few ol farmer cars outside the pub and ran through the town floral bed. Police were called. No one knows where he went after that, what happened to him.

The agent took to faking people interested and would have his sister and brother and law parade around the perimeter and say things like "this'd be a good place for a house" in an unnaturally loud voice.

Meanwhile I counted up my coins I had hidden in the sheep shed and dug up some old jewelery. I contacted the girls (finally) and got the ok for first option.

I made my offer to the agent. He was a rude bugger and laughed a fake, put on for put down sort of patronising laugh. Said he wouldn't even insult the owners by putting it to them. I insisted he put it to them despite his attitude. Still refused, so I had to ring them again myself and tell 'em about my scorned offer.

The agent was old family and just loved any opportunity to put down a "blow in" like myself (only 16 yrs here). Gets pathological with some people. I mean how many generations does it take before your not "a townie"?

The block was mine.
Posted by gavgams at 9:00 AM 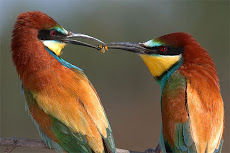 are they fighting or caring and sharing?